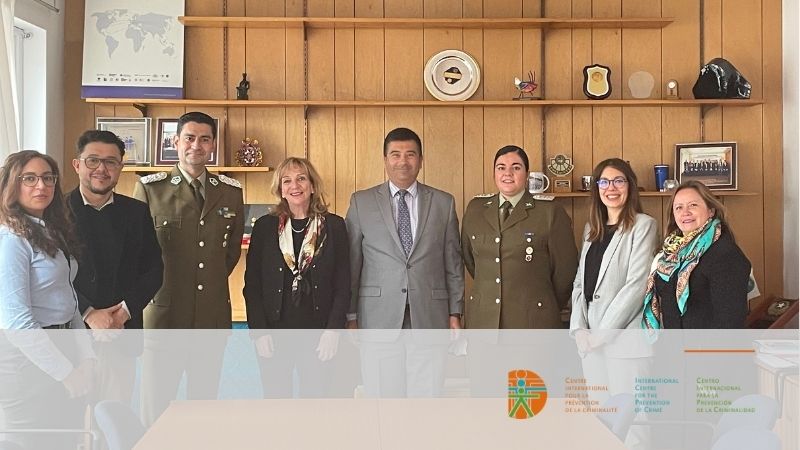 In the framework of the reciprocal cooperation agreement developed with its partner, the Carabineros de Chile, the ICPC received last week a delegation in Montreal in order to exchange on their approaches to build a common vision on crime prevention and on different policing approaches.

The ICPC and the Carabineros de Chile were hosted in Nicolet to meet with Mr. Pierre St-Antoine, Director General of the École Nationale de Police du Québec, as well as members to discuss approaches related to community policing and concentration policing.

In addition, we had the pleasure of being welcomed by Mr. Fady Dagher, Director of the Service de police de l’agglomération de Longueuil for a meeting and field visit in Longueuil,  by Mr. Yann-Cédric Quéro, Chief of the Partnership and Diversity Division of the Service de police de la Ville de Montréal for a meeting in Montreal, as well as  by the Sûreté du Québec and the Service du renseignement criminel du Québec for discussion meetings.

We would like to thank all the ICPC partners who made these visits and exchange sessions possible.

Finally, we would like to thank our partners, the Carabineros de Chile; it was a pleasure to welcome them and accompany them with the objective of developing common activities favoring the development of more inclusive and safer societies and communities.

The ICPC took part in the Traffik Analysis Hub (TAHub)’s January meeting, a network of 116 organizations across the globe, including the ICPC, whose goal is to contribute to the eradication of human exploitation of all kinds. This meeting included a presentation of new indicators that facilitate the analysis of current tendencies in human trafficking. The American organization Polaris whose mandate is to fight human trafficking also presented a data collection project focused on the U.S.-Mexico agricultural setting. Thanks to the implementation of a hotline, this organization has been able to collect information directly from victims, mostly undocumented Mexican workers, thus widening their impact in the community. 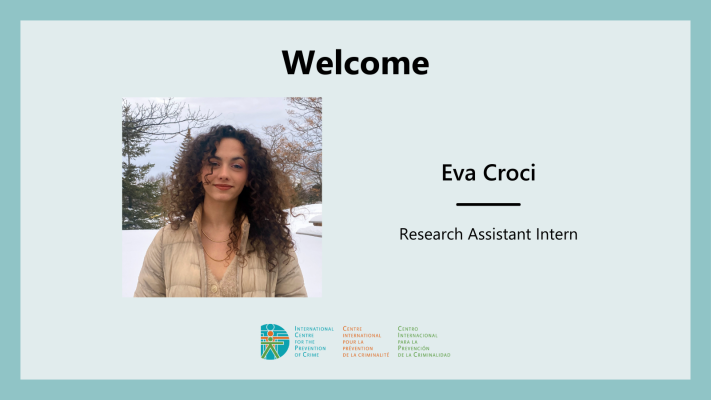 In January 2022, the ICPC welcomed a new employee to the team: Eva Croci.

Eva, Research Assistant Intern, is currently doing her master’s in international public policy at Sherbrooke University. As part of her studies, she is doing a supervised project on Western far-right terrorism with the UNESCO Chair in Prevention of Radicalisation and Violent Extremism, an ICPC partner. She gained experience as a research assistant at Sherbrooke University where she worked on issues related to terrorism and cybercrime. As part of her internship, she will work especially on projects with a focus on the prevention of the glorification of firearms on social media. 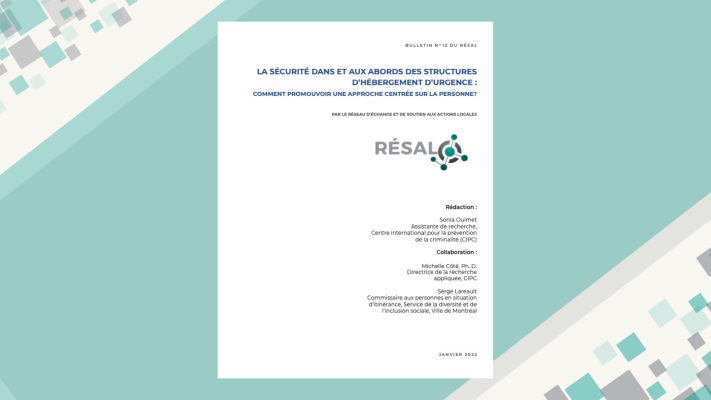 The Réseau d’échange et de soutien aux actions locales (Network for exchange and public action support, RÉSAL), coordinated by the ICPC, has published its 12th bulletin. This bulletin discusses safety in and around emergency shelter structures and poses the question of how to promote a human-centred approach.

This publication draws a portrait of the current state of emergency shelters in Montreal, reflects on the complexity of security within the context of emergency services for the homeless, describes the problem of social cohabitation, looks at other problems specific to these services’ clientele, presents an approach to be developped, explores the limits of private security, and situates the issue within COVID-19 and its related health measures.

Read the bulletin (available in French)

The UNESCO Chair in Prevention of Radicalisation and Violent Extremism (UNESCO-PREV Chair), Sherbrooke University, partner of the ICPC, published this month an international exploratory study called “Améliorer l’évaluation en prévention de l’extrémisme violent, c’est l’affaire de tous !” (Improving evaluation in violent extremism prevention is everyone’s business!). This study aims to document the experiences, challenges, and learning of researchers and field workers who evaluated radicalization and violent extremism practices and programs in various western countries. It is based on semi-structured interviews of such researchers and field workers done by the ICPC and the UNESCO-PREV Chair in North America and Europe in early 2020.

The ICPC was invited by the International Union of Railways (UIC), an ICPC partner, to take part in the 16th UIC World Security Congress held online on December 9th. The theme of the conference was the organization of security during major events, and subjects discussed included international cooperation during major events, lessons learned from UIC members, and emerging threats to transport security.

The ICPC’s presentation focused on its experience in preventing violence resulting from radicalization in an urban mobility context.

On December 7th, the ICPC took part in the first day of the forum Montréal sécuritaire pour les jeunes : dialogue sur l’intervention en prévention de la violence (Montreal Safe for Youth: Dialogue on violence prevention and intervention) to present an overview of the chapters and highlights of the “Rapport sur la violence commise et subie chez les jeunes de Montréal” (Report on Violence Committed and Suffered by the Youth of Montreal), a recent publication by the ICPC. This meeting of community and institutional partners involved in prevention aimed to:

The meeting was organized by the Montreal Service de la diversité et de l’inclusion sociale (Service for Social Diversity and Inclusion – SDIS) in collaboration with the Réseau d’échange et de soutien aux actions locales (Network for exchange and local action support – RESAL), of which the ICPC is a coordinating member, and the Institut du nouveau nonde (New World Institute – INM). 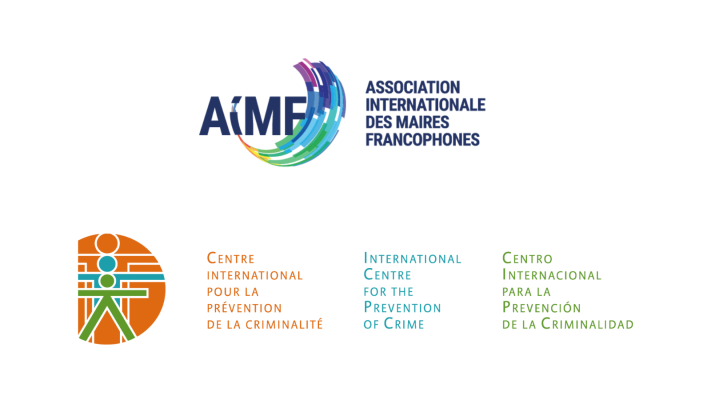 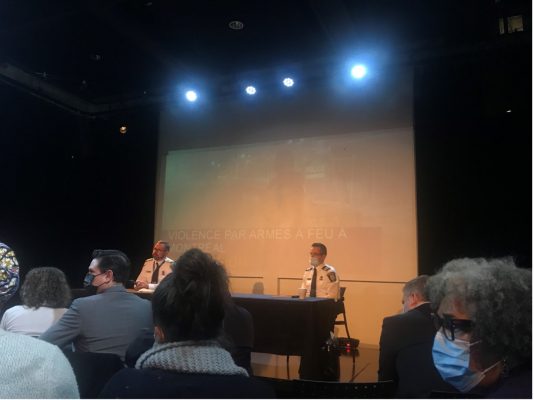 On November 30th, the ICPC had the pleasure of attending a presentation of the strategic plan for fighting gun violence and of the Équipe de concertation communautaire et de rapprochement (Team for Community Dialogue and the Development of Closer Ties – ECCR) given by the Service de police de la ville de Montréal (City of Montreal Police Department – SPVM), an ICPC partner, in collaboration with the neighbourhood station #30 of the Saint-Michel neighbourhood.

Concerning gun violence, the SPVM presented the current situation in Montreal and the main directions taken by the strategic plan for fighting gun violence. In particular, the SPVM highlighted the importance of collaborating with the community when it comes to the prevention of gun violence.

This meeting with the community was also an opportunity to meet the new ECCR that has been deployed since April 2021 in many areas of Montreal. This unit aims to connect with citizens and community organizations to find common and sustainable solutions to current or emerging issues around social cohabitation and urban safety.

The event was also an opportunity to introduce several local initiatives in which the neighbourhood station #30 is involved, in particular, those aiming to develop closer ties with the community, especially with youth. 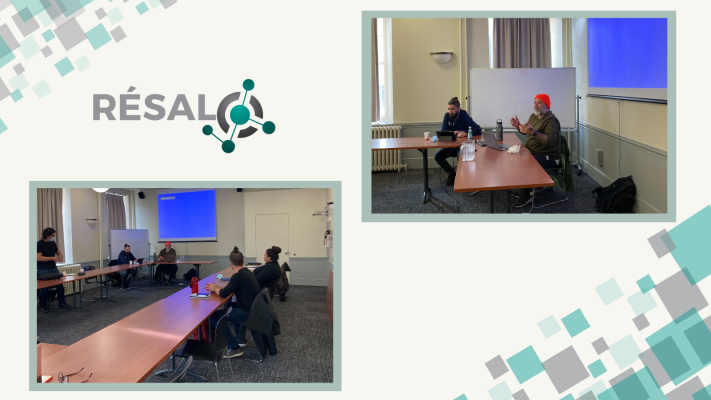 As part of the development of the Réseau d’échange et de soutien aux actions locales (Network for exchange and local action support, RÉSAL)’s community of practice, of which ICPC is a member and the coordinator, a fourth training session in a series of activities planned this fall was held on November 11th. This training session mainly addressed community workers in Montreal to introduce methods of approach, of contact, and of intervention in street work for people working with youth and with people living in difficult situations.

The activity was hosted by Maxime Bonneau, clinic coordinator and trainer for PACT de rue, a community organization and RÉSAL member that works directly with youth and people in difficulty to promote a healthy lifestyle and prevent risk behaviors.

The following subjects were discussed: