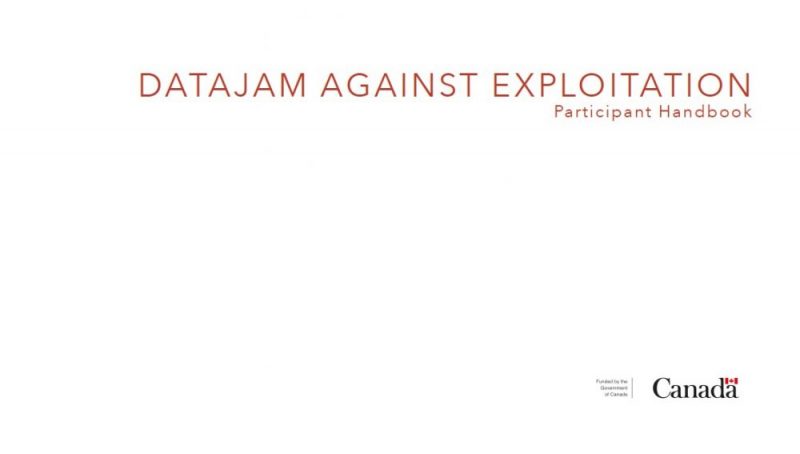 As part of the DataJam Against Exploitation 2021, the first online innovation competition in Canada, a “Participant Handbook” was developed and published. The event, financed by the Government of Canada, was organized in partnership between the ICPC, Fundación Pasos Libres, IBM, and the UNODC.

The handbook was adapted and translated collaboratively by the Fundación Pasos Libres, the ICPC and the UNODC from an earlier version published by Fundación Pasos Libres, with the support of IBM Corporate Social Responsibility, as part of the training materials for the DataJam Pasos Libres Online 2020, the first international contest of its kind, also on human trafficking.

The DataJam Against exploitation, held in May 2021, aimed to develop technological solutions to spot and fight human trafficking in Canada, especially the trafficking of youth, indigenous people, and members of the LGBTQI+ community. The contest also hoped to increase public awareness of human trafficking, to improve participants knowledge and resources, and to further intersectoral and interdisciplinary collaboration. The handbook contains three explanatory modules offering the reader an introduction to human trafficking in Canada and related issues, an overview of data’s importance in the fight against this crime, and case studies.

The first module, Introduction to Human Trafficking, discusses means of exploitation, risk factors, and recruitment and control methods. It also takes a brief look at different forms of legislation aimed at the prevention of human trafficking.

The second module, Human Trafficking and Data, explores the importance of data in the fight against human trafficking. It gives a few examples of key industries and compelling data as well as certain data security and protection considerations.

The last module, Case Studies / Cases of Success, is on three organizations and initiatives that used the power of data and collaboration to prevent and fight human trafficking.