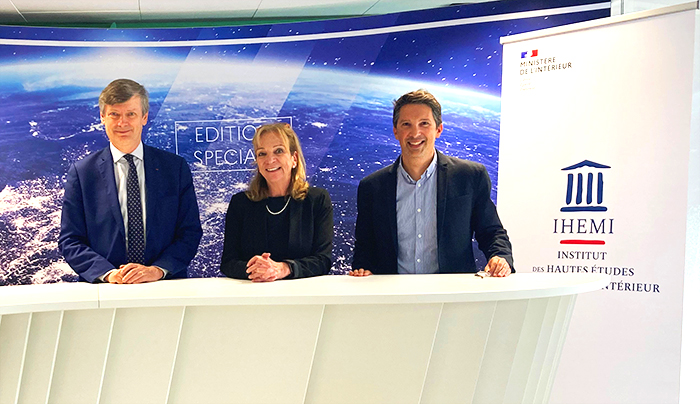 The ICPC was back on a mission in Europe. During the month of May, Director General Ann Champoux met with several members, partners and new collaborators to discuss opportunities for collaboration in crime prevention.

Meeting with the President of the ICPC Board of Directors, UIC and ONDT

On Tuesday, May 17th, in Paris, the ICPC met with the President of the Board of Directors, Isabelle Lonvis-Rome, in order to discuss, among other things, the strategic programming 2021-2023 of the ICPC.

In the afternoon, the Director General met Marie-Hélène Bonneau, Head of the security division for the International Union of Railways (UIC), and Fabrice Fussy, Head of the National Observatory of Crime in transports (ONDT), with the aim of exchanging and collaborating on the organization of a conference to be held in autumn 2022.

Meeting with the International Relations Department of the Bordeaux City Council

The Director General and the President of the Board of Directors of the ICPC went to Bordeaux for a meeting at the Judicial Court of Bordeaux in order to exchange with French stakeholders on issues related to domestic violence and Equality between women and men.

Afterwards, Ann Champoux met Sophie Senghor, Deputy Director of the President’s Office and la Direction des Relations Internationales de la mairie de Bordeaux (the International Relations Department of Bordeaux City Council). This meeting was an opportunity to present the current activities of the ICPC, as well as the perspectives of collaboration to be set up in Bordeaux, around projects related to the prevention of the exploitation of women and urban safety.

On Friday, May 20, the ICPC was back in Paris to meet Lisa-Marlène Ntibayindusha, Political Affairs and Cooperation Advisor of the Délégation Générale du Québec à Paris (General Delegation of Quebec in Paris). The meeting focused on the current activities of the ICPC and future collaborations, notably for the organization of an international conference in autumn 2022.

On Monday, May 23, a meeting took place at the offices of the UITP in Brussels, the International Association of Public Transport, with Karine Sbirrazzuolo, Co-Director of the Knowledge & Innovation Department, and Mohamed Mezghani, Secretary General, for a working meeting on security in transport.

In the afternoon, a discussion took place with Stéphanie Franssen, Bilateral Affairs and Cooperation Attaché of the Délégation générale du Québec à Bruxelles (General Delegation of Quebec in Brussels, DGQB), to provide an update on international projects and future collaborations.

On Tuesday, May 24, the ICPC was hosted for a working meeting at the offices of Bruxelles Prévention & Sécurité (Brussels Prevention & Security) to meet with the Executive Committee, including among others, the Director General and High Official for the Brussels region, Sophie Lavaux, as well as the Director of the Brussels Observatory for Prevention and Security, Christine Rouffin.

On Wednesday, May 25, Ann Champoux and Fabrice Fussy, Head of the National Observatory of Crime in transports, a partner organization of the ICPC, met with Éric Freysselinard, French High Civil Servant, Director of the Institute of High Studies of the Ministry of the Interior (IHEMI), to discuss issues related to transport insecurity in France.

We would like to thank all our collaborators for their welcome and these fruitful exchanges. 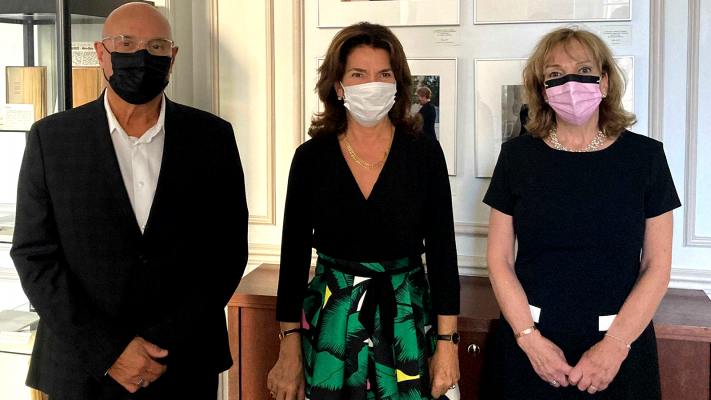 This month, during her visit to Europe, the ICPC’s Director General met with many members, partners, and new collaborators to discuss cooperation opportunities for crime prevention.

On Monday October 18th, in Paris, the ICPC met with Corinne de la Mettrie, Deputy Director of the Association des maires de France et des présidents d’intercommunalité (AMF), Pauline Tivelet, Project manager and Head of European and International Affairs of the AMF, Nathalie Genest, Political Affairs and Cooperation Attaché of the Délégation générale du Québec à Paris (General Delegation of Quebec in Paris, DGQP), and Nicolas Pasquier, Political Affairs and Cooperation Intern of the DGQP. This meeting was an opportunity to present the ICPC, its ongoing projects, its key initiatives, especially the Urban Safety Laboratory, and to consider future collaboration.

On Tuesday, October 19th, in Paris, the ICPC met with Michèle Boisvert, General Delegate of Quebec in Paris, to exchange on how to support Quebec-France internationalization projects in crime prevention.

The ICPC attended the seventh international conference organized by the European Forum on Urban Security (Efus), an ICPC member, in Nice. The conference took place from October 20th to 22nd and included many workshops on the role and involvement of citizens, mayors, cities, and local authorities in urban safety that the ICPC attended. The ICPC also took the opportunity to reconnect with several international partners and discuss future collaboration. The ICPC also attended an award ceremony at which the Observatoire international de la délinquance dans les transports (International Observatory of Crime on Transport), an ICPC member, gave out the PrixPrev, a prize for local stakeholders who developed inspiring prevention practices. This year’s theme was “Mobility and safety”.

On Tuesday, October 26th, in Brussels, the ICPC met with Laetitia Nolet, Coordinator of the Belgian Forum for Urban Security, about prospective collaborations in crime prevention and safety.

The International Association of Public Transport

Also on October 26th, the ICPC met with Karine Sbirrazzuoli, Deputy Director of the International Association of Public Transport (UITP) to discuss crime prevention and safety on transport among other things.